Over the years, Chicago trumpet player and composer Rob Mazurek has developed his own kind of musical subgenre, while at the same time still trying to move forward and break boundaries, without relinquishing his own musical signature. This years he brings us two gems: a quartet and a solo album.

His signature sound is a combination of strong themes, rhythmic complexity and the capacity to bring light to music. His music, and his soloing shine. They radiate joy and bring clarity to the listener’s environment. It’s hard to describe, but that’s how it comes across: a majestic brightness arises out of his music.

The quartet consists of Mazurek on piccolo trumpet and electronics, Kris Davis on piano, Ingebright Håker Flaten on bass, and Chad Taylor on drums. The music is dedicated to Mazurek’s father Henry who passed away in 2016. You would expect the music to be sad and intimate, yet it isn’t. It is vibrant with life and energy, it is an ode to life and possibly to all the good things remembered about him: «sometimes harsh and sometimes sweet as a blue bird… but he was an Honest Man… took care of his family».

The quality of the music is excellent. Most tracks are built around core themes, with ample time and space for improvisation, and with an even more remarkable space for individual instruments to take the piece to surprising areas, but with great respect for its coherence.

The whole band is spectacular. Mazurek does not often play with acoustic pianists – with the exception of Angelica Sanchez on a few albums – but Kris Davis really co-creates the wonderful sound of this album. She is fully at ease with the grand themes, and in her comfort zone for the rhythmic soloing. Håker Flaten drives some of the greatest parts of the album, including the repetitive bass vamp and solo on «Sun Ohm 3«. Chad Taylor and Mazurek have a long-standing relationship, and they feel each other almost subconsciously, with the drummer’s inventive and solid playing adding to the brightness of the sound. Mazurek’s sound is also clear and jubilant, even if he takes the front position only at rare occasions, but his real strength – like on most of his ensemble albums – is the quality of his compositions, the smart structuring and pacing of the pieces, and his incredible talent for beautiful themes, that will continue to resonate in your head long after you’ve stopped listening to the album.

For the last few weeks, I have been listening to this album possibly three four times a day, and it grows on you, sharing and more and more of its beauty and power as you listen to it.

This is jazz at its best, with great music, exceptional musicians, and a brilliant delivery, making the listener rejoice with the quality of it all, while at the same time being moved by its emotional power. There are gentle moments, joyful moments, sad moments, energetic moments, chaotic moments … Life is complex, and so are father-son relationships. I guess most fathers would appreciate a tribute like this one. 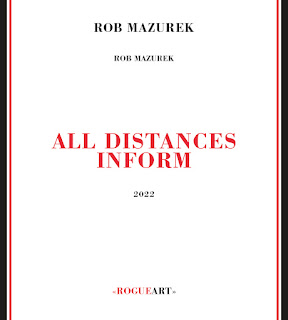 «All Distances Inform» is a great addition to Mazurek’s oeuvre of solo recordings. I assume that the title refers to the spaces in which the improvisations were performed, at the Chinati Foundation in Marfa, Texas, located in the desert.

I am not sure the performance was recorded in the space in the picture below, but it might well be the «large room» mentioned on some of the track titles. It presents a permanent collection of works by Donald Judd, 100 untitled works in mill aluminum, 1982-1986. 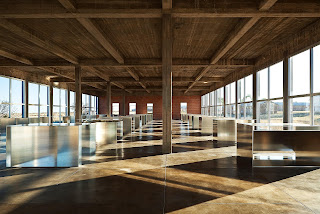 You can imagine Mazurek performing here. You hear his piccolo trumpet resonate in the space, you can hear him walk through this environment that is both closed and completely open, with the desert light shining and reflecting on the artwork in the hall. You can hear him listen to his own echo and dialoguing and expanding on what he hears. His playing is slow, precise, allowing the notes to develop their sound colour as they explore the world around him. Is it moaning? Is it singing? Is it praying? I think it’s more like an incantation, a spiritual experience that is physical at the same time.

The album has an amazing coherence of sound, and is in that sense more to my preference than his other solo work like «Abstractions On Robert D’Arbrisel«, and definitely more accessible than «Mother Ode» or «Silver Spines«.

The overall sound is austere, stripped of melody, rhythm, with no frills or unnecessary sonic ornamentation. The sound is clear, crystal clear very often, like the light that floods the room, and makes it shine.

It is Time to Discuss About Alice Glass • Impartial Music Promotions

Which Instruments are used in Jazz Music?